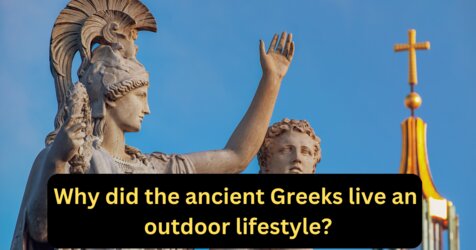 Why did the ancient Greeks live an outdoor lifestyle?. in this article, you will read all the information regarding this question.

The ancient Greeks were renowned for their outdoor lifestyle, which was characterized by an intense connection to nature, a dedication to physical health, and a strong emphasis on communal activities.

This article will explore the reasons behind the ancient Greeks’ preference for outdoor living through 10 concrete examples. These examples will include the use of the agora, the prevalence of outdoor religious ceremonies, the development of the gymnasium, and the focus on athletics.

in this article, we will share a brief summary of the main points and their implications for modern society.

The agora was a place that citizens gathered to discuss politics, take part in public festivals and religious ceremonies, and engage in commerce.

This public space was look like a open society of today democratic society and in this space, people were free to talk whatever they want and there was not any kind of discrimination among people. It was also typically located outdoors and was a focal point for social interaction.

The ancient Greeks believed that the gods could only be properly worshipped outdoors, and so these ceremonies were essential for maintaining their connection to the divine.

The ancient Greeks developed the gymnasium as an outdoor space for physical training. These gymnasiums were typically surrounded by colonnades and gardens, and were open to all members of the community.

The gymnasium was an important part of ancient Greek life, as it provided a place for citizens to exercise and stay physically fit.

Athletics were an important part of ancient Greek life and were held in a large outdoor arena. These athletic competitions included running, wrestling, boxing, and chariot racing and athletes were highly celebrated.

Outdoor markets were a common sight in ancient Greek cities. These markets provided a place for citizens to buy and sell goods, as well as socialize with one another.

The markets were typically located outdoors and were a focal point for community life.

Outdoor festivals were a common way for the ancient Greeks to celebrate their gods and heroes. These festivals featured music, dancing, and feasting, and often involved processions and sacrifices to the gods.

These festivals were typically held outdoors and were a focal point for communal celebration.

Outdoor sports were also famous among ancient Greek people. These sports included wrestling, javelin throwing, and discus throwing. These sports were typically held in an outdoor arena and were a popular way for citizens to stay fit and have fun.

The ancient Greeks had an intense connection to nature and a strong emphasis on physical health, which led to a lifestyle that was largely centered around outdoor activities. This lifestyle was reflected in the ancient Greeks’ use of the agora, the prevalence of outdoor religious ceremonies, the development of the gymnasium, and their focus on athletics.

These 9 concrete examples demonstrate the ancient Greeks’ preference for outdoor living, and their lifestyle serves as an important reminder of the importance of staying connected to nature in modern society.

What was the ancient Greeks lifestyle?

The ancient Greeks lived in city-states, or small self-governing communities. Their interest in politics should not be ignored, they were also much more conscious about their identity.

The Greek people were loyal to their homeland as well. Ancient Greek lifestyle was focused on community, art, and culture. The majority of the ancient Greeks were farmers, but they were also highly skilled craftsmen, sailors, and traders. Sports was a popular game among Greek people.

Along with that they were shown interest in performing arts. The most admirable thing about ancient Greek people was about their deep interest in education. Religion was an important part of ancient Greek life, with gods and goddesses worshipped in temples and festivals held regularly.

Which factor most influenced the Greeks outdoorsy way of life?

One reason why did the ancient Greeks live an outdoor lifestyle?, was due to the geography. The geography of Greece was the most influential factor in shaping the Greeks’ outdoorsy way of life. The Mediterranean climate, mountains, and rugged coastline provided an ideal environment for outdoor activities such as hunting, fishing, and sailing. These activities were an integral part of everyday life in Ancient Greece and were celebrated in literature and art.

Why did people settle outside mainland Greece?

There were various reason why did the ancient Greeks live an outdoor lifestyle. People settled outside mainland Greece for various reasons, including: to take advantage of opportunities for trade and commerce; to access resources such as timber, minerals, and other resources; to explore and colonize new lands; to form new societies and cultures; and to escape political and religious persecution.

How does such an environment affect life in ancient Greece?

One reason why did the ancient Greeks live an outdoor lifestyle?, was due to the warm climate. Life in ancient Greece was greatly affected by the environment. The geography of Greece dictated the way in which people lived and interacted with each other. The mountainous terrain and limited resources meant that the population was scattered and people had to rely on trading and bartering with each other for goods and services.

The climate also impacted life in ancient Greece, as the hot temperatures and extended dry seasons made farming difficult and necessitated the use of terracing and irrigation systems to keep the soil moist. The rugged nature of the terrain also limited the size of settlements and made travel between them difficult, thus limiting the spread of ideas and culture.

Who were the ancient Greeks?

The Ancient Greeks were an ancient civilization that developed in Greece from the 8th century BC to the 6th century AD. They are considered the cradle of Western civilization and are renowned for their art, philosophy, democracy, literature, and architecture. The Ancient Greeks developed a complex religion, mythology, and culture. Skill in warfare and Naval prowess, these were two important things, they were also known for.

How was ancient Greek lifestyle and culture?

Ancient Greek culture was heavily influenced by the values and beliefs of their gods. They believed in a polytheistic religion, with gods and goddesses representing different aspects of their lives and the natural world.

Ancient Greeks were also heavily influenced by their geography and their environment, which shaped their lifestyle, language, and architecture.

Ancient Greek culture was particularly focused on excellence and the pursuit of knowledge, which was reflected in their art, literature, and philosophy.

Ancient Greeks also valued physical fitness, competition, and good health, which is why they created the Olympic Games.

Ancient Greek culture was also highly focused on the importance of the family and the community, with strong social and political hierarchies, and a focus on hospitality and generosity.

what did the ancient Greeks wear?

Some facts about ancient Greece

Ancient Greece was a powerful civilization that existed thousands of years ago. This civilization, which was located in the Mediterranean region of Europe, was home to some of the most influential thinkers, artists, and leaders in human history. It was a major contributor to the development of democracy, philosophy, literature, art, architecture, science, and mathematics.

Ancient Greece is best known for its contributions to philosophy and literature. you also heard the names of Socrates, Plato, and Aristotle, they were world known philosophers and they belonged to Greek. Their popularity is still there and people want to know them more deeply, their quotations is used to read and listen with respect. They developed theories about the universe, morality, and the nature of knowledge.

Ancient Greeks also wrote some of the earliest works of literature, including the works of Homer and Hesiod.

Ancient Greece produced some of the most impressive artwork and architectural feats in history. Greek pottery and vases were also very popular, with some of the best examples being found in the ruins of the city of Troy.

Ancient Greece was a powerful and influential civilization that made significant contributions to many aspects of human culture. Its contributions to philosophy, literature, art, architecture, science, and mathematics have had a lasting impact on the modern world.

Life in ancient Greece revolved around the city-state of the Greeks, which was a group of people who shared a common language, culture, and religious beliefs.

Every day, the Greeks would start their day with prayer and sacrifice to their gods. They would then go to the agora, or marketplace, to buy and sell goods, and also to socialize.

The typical Greek family was made up of a father, mother, and children. Each day, the men would leave the home to work or participate in politics, while the women tended to the household.

Education was important in ancient Greece, and boys were taught reading, writing, math, and music. The ancient Greeks also enjoyed festivals and religious events, such as the Olympic Games.

The ancient Greeks were also known for their love of philosophy and science.

The ancient Greeks enjoyed a variety of activities as part of their leisure and entertainment. They were known for their love of athletics and physical fitness, and also enjoyed music, dancing, theatre, and the arts. They held frequent festivals, public gatherings, and symposia, where they would share food, drink, and conversation.

Ancient Greeks also enjoyed outdoor activities such as hunting and fishing, as well as board games and gambling. In general, leisure and entertainment were highly valued activities in ancient Greek society.

Daily life of a man in ancient Greece

Life in ancient Greece was very structured and different from life today. Men had a much higher status than women and children and were expected to play an important role in society.

At the age of 18, a man was expected to register in the citizen army. He was then required to serve in the army for two years. After his two years of service, he could become a full citizen. He was then allowed to vote, own land and marry.

Men would often work in agriculture or trade. They were also involved in fishing and hunting. They might also work as craftsmen, such as potters or sculptors. Men were also expected to participate in public life. They would attend public meetings and debates, and even serve on juries.

Daily life in Ancient Greece was centered around the city-state. People lived in small communities with their families, and were able to identify with their community. The city-state consisted of an acropolis, or a fortress, which contained temples, public buildings and palaces. People in the city-state worked together and shared resources, like food and water.

People in Ancient Greece were farmers, fishermen, and merchants. They also made pottery, jewelry, and fabrics. They traded goods with other city-states, and also imported goods from other countries.

Most Ancient Greeks were also warriors. The city-states were often in conflict with each other, and the men in the city-state were usually the ones who fought in the battles.

In Ancient Greece, People believed in the gods and goddesses of the Greek pantheon, and offered sacrifices to them. The Oracle of Delphi was a sacred site where the gods were consulted for advice.

Daily life in Ancient Greece was full of hard work, but also relaxation, leisure, and entertainment. People enjoyed music, theater, and the arts. Dance and festivals were also popular.

No comments to show.